Wayne County Election Results PRIMARY DAY, June 28 Unofficial results for Wayne County from the Board of Elections with ALL districts now reporting, and absentee ballots and early voting totals included: FOR GOVERNOR AND LT. GOVERNOR: Democrats chose Kathy Hocul with 75.16% of the votes: 1268   Others:  Suozzi: 254,  Williams: 153, write ins: 12 […]

Photos: This week in Local Sports
Speedy Mike Leaty makes way to Victory Lane at Spencer
Newark Pilots are back, and in more ways than one
Spencer Speedway kicks off 67th season of racing
Several Gananda Student Athletes sign letters of intent

Stay up-to-date with everything happening around the county and around our community. 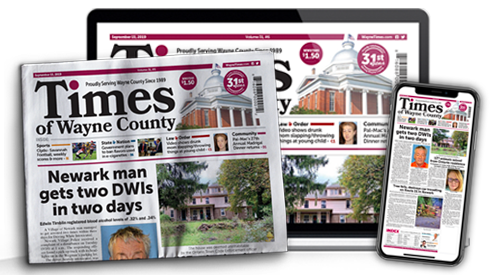 Democrats face off in last NY governor debate before primary

By MARINA VILLENEUVEAssociated Press ALBANY, N.Y. (AP) New York Gov. Kathy Hochul, who is running for election to the post after assuming it following Andrew Cuomo's resignation, faced off Thursday in a final debate with two of her fellow Democrats, U.S. Rep. Tom Suozzi and New York City's elected public advocate, Jumaane Williams, who are […]

State Police out of Williamson received a report of an Amazon package being stolen off the porch of a house on Route 21 in Williamson on June 10. The incident was caught on home surveillance video. Following an investigation, on Saturday (6/11) at 1:05 p.m. State Troopers arrested Daisey I. Cumbus, age 51, residing at […]

NEWARK: Regina May Krolak, 91, died Tuesday (June 28, 2022) at St. Ann’s Home in Rochester. A Mass of Christian Burial will be celebrated at 10 AM on Saturday (July 9th) at St. Michael Church, South Main Street, Newark.  Burial will be in Newark Cemetery. Memorials in her memory may be made to either: St, […]