Cayuga County Sheriff Brian Schenck reported that members of the Cayuga County Sheriff’s Office are investigating a fatal motor vehicle accident that occurred at approximately 1:45 PM on Sunday, November 10, on  Route 31 in the Village of Weedsport.

The investigation has shown that a compact tractor was being operated by Mark A. Knapp, age  59, of 2572 Hamilton Street, Weedsport in an easterly direction completely on the South Shoulder of  Route 31. 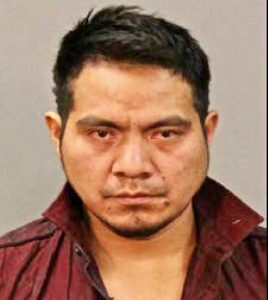 Knapp’s tractor was struck from behind by a 2010 Chevy Cobalt being operated by Heriberto R. Perez-Velasquez, age 31, from the Town of Savannah.

Mark A. Knapp was ejected and suffered fatal injuries and was pronounced dead at the scene. Perez-Velasquez fled the scene on foot and was apprehended a short distance away by Sheriff’s Office personnel with the assistance of a private citizen. It appears Knapp was driving the tractor to a car wash in Weedsport, Sheriff Brian Schenck said. Knapp planned to wash the tractor before putting it away for the winter, he  added.

Perez-Velasquez was  charged with Vehicular Manslaughter in the 2nd Degree – Felony; Driving While Intoxicated – Misdemeanor; Leaving the Scene of a Personal Injury Accident – Misdemeanor; Fail to Use Designated Lane - Infraction. He did not have a driver’s license, according to deputies.

The investigation has revealed that Perez-Velasquez is an undocumented immigrant originally from Guatemala. Perez-Velasquez has pending charge for an Aggravated Driving While intoxicated arrest in Wayne County on Friday, October 18.

A State Trooper out of Wolcott found Perez-Velasquez behind the wheel of his running 2010 Chevy Cobalt, parked in the middle of Route 89 in the Town of Butler, on Friday (10/18) at 11:25 p.m.

It was discovered Perez-Velasquez was intoxicated and as the trooper attempted to handcuff him, he took off running. He was quickly taken down and charged with Driving While intoxicated, Aggravated Driving While Intoxicated with a blood alcohol level of .22%, Resisting Arrest and several other vehicle and traffic charges.

During the course of the arrest, Perez-Velasquez was unable to produce a valid identification, and admitted he did not possess a driver’s license. Troopers contacted U.S. Customs and Border Protection in an attempt to identify Perez-Velasquez. CBP could not respond to question Perez-Velasquez and requested that he be detained.

Once State Troopers delivered  Perez-Velasquez to centralized arraignment, they declined his case due to the new laws and Perez-Velasquez was then simply released on appearance tickets.

“This is exactly what is going to happen”, said one State Police Trooper. If the arrest does not fit the new “criteria”, certain people will be released. Local courts no longer have the judgement/discretion to put someone, anyone behind bars.

Wayne County District Attorney Mike Calarco stated that since the new laws technically do not go into effect until January 1st, Heriberto R. Perez-Velasquez should have been arraigned.

But State Police have been following the new directives imposed by the State for well over a month and besides Centralized Arraignment in Wayne County refused to accept him on the charges.

According to District Attorney Calarco, Vehicular Manslaughter is technically a ‘no-bail offense’ and a case must be argued before the court to have bail set.

On the Wayne County arrest from Friday (10/18), Perez-Velasquez will appear in Butler Town Court on November 27.

SAVANNAH: Age 95, passed away unexpectedly on February 2, 2023 at home.  Bernice was born December 18, 1927 in Savannah, NY, the daughter of Hazel and Stanley Wilsey of Wilsey Road. Bernice was one of eight children.  Bernice was a graduate of Savannah High School. She married Charles O’Connor; together they raised six children. In […]