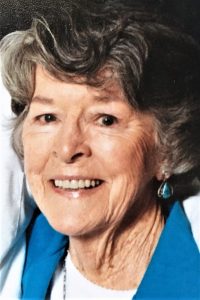 HAMMONDSPORT/PULTNEYVILLE/SUGAR LOAF: Entered into rest peacefully on June 15 at age 94. She was the last of OUR greatest generation of aunts and uncles –they have never been forgotten.  She is survived by daughters:  Jessica Kohout (Bob Brown) and Judith Kohout (Howard Brenner), grandchildren: Rob Brown, Farrell Brenner, Daniel Brenner, Morgan Brenner, Michelle Brown Ryan and Teresa Brown Amble, and innumerable and wonderful nieces and nephews on both the Farrell and Kohout sides of the family. Nickie was born in Caledonia on October 8, 1925 to the late Alice Irene and Frederick Farrell. She excelled in pretty much everything she put her hand to.  Nickie went on to college at the Albright School of Art in Buffalo but her studies were interrupted In December 1946 when George Kohout returned to the States on leave from Firestone Plantations Company in Liberia, West Africa and proposed, Nickie accepted and they were married on December 28, 1946. At 21 she shipped off to Liberia and never looked back. Her first home in Liberia was very remote with an incredible view of the surrounding rubber and bush. There was no electricity and water came from a cistern at the back of the kitchen. They cooked on a wood stove, slept under mosquito netting and used kerosene lamps. She and George hunted and fished together. Pets were many and varied. Nickie loved it there. Most of the entertainment available on the Plantation relied on the imagination and talent of the staff. With her background and talent in art and music, Nickie fit in quickly. She sang in and directed the choir, performed in concerts, recitals and plays, and directed the children’s Christmas pageants. Her participation ran the gamut from performing to planning costuming, music, staging and props. She designed and got help building floats and dressing the participants for inaugural parades in the Monrovia, the capital city, and stenciled all the vehicles for the Plantation Police Department. She was a meticulous draftsperson creating map after map for Firestone. Her large signs that welcomed travelers to the plantation still stand today more than 40 years later. Returning to the States after 36 years, she and George settled in Hammondsport, NY. She got busy with   church choirs in both Hammondsport and later, Pultneyville, and painting nativity pieces for the Hammondsport United Methodist Church. Nickie found time to march for environmental and women’s issues, worked with Meals on Wheels and the Women’s Club. She and George enjoyed visiting family and friends across the US. After George passed in 2001, she continued to attend grandchildren’s concerts, sporting events and graduations – cheering their accomplishments and taking trips with the families.  Her talents, wit, fearlessness and love of family will be sorely missed. A celebration of her life will be held at a later date at the convenience of the family. In lieu of flowers, if you are so inclined, please donate to a charity of your choice in Nickie’s memory. Brooks Funeral Home www.brooksfh.com ( 845)561-8300.

MACEDON: Gerry was born in East Rochester, NY on 6/16/1927 and she passed away peacefully on 9/25/2020. She was predeceased by her husband, Gerald Deming; mother and father, Frank and Kathleen Wood; mother and father in law, Jasper and Laura Deming; son, Christopher Deming; sister and brother in law, Gladys and Jack Holton I; brother […]

SODUS: Age 59 passed away unexpectedly in a motorcycle accident Friday, September 25th 2020 along with his longtime companion, Kim Chavous. He was predeceased by his daughter, Crystal Fremouw and sister, Brenda Middleton. He is survived by his son, Kyle (Angela); grandchildren, Chase & Abigayle Fremouw, Kya & Ella Cole; parents, Theodore & Mary Cole; […]